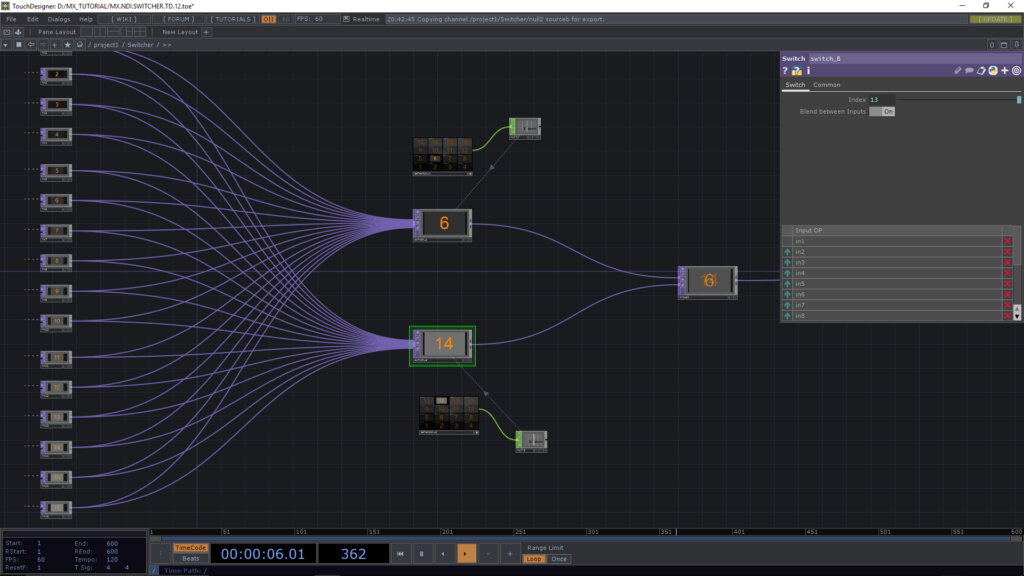 TouchDesigner is a visual development platform that equips you with the tools you need to create omnimedial realtime projects and novel user experiences. Whether you’re creating interactive media systems, architectural projections, live music visuals, or simply rapid-prototyping your latest creative impulse, TouchDesigner is a great platform to do all of the above and more.

TouchDesigner is an almost limitless tool for real-time creativity  built for artists, performers and researchers. It allows them to work with generative and recorded media in a very free and easy way. Programs and shows are being built by connecting visual building blocks to networks.

Everything you do in TouchDesigner happens in realtime while you experience the result you are working on it. TouchDesigner visualizes data flow through each step of the process. Experimentation and iteration are at the core of TouchDesigner’s design philosophy, making it one of the fastest and most flexible tools for rapid-prototyping.

TouchDesigner works well with the world around it. Whether it is other software, protocols, hardware devices, or the web, extensive options for interoperability let you integrate TouchDesigner into any environment.

The company behind TouchDesigner, Derivative was founded in 2000 by Greg Hermanovic, Rob Bairos and Jarrett Smith in Canada.

TouchDesigner’s deep roots are in the PRISMS software product developed at Omnibus Computer Graphics in Toronto, Los Angeles and New York in 1984 to 1987. When Omnibus collapsed due to higher than anticipated costs of purchasing and maintaining its competitors, coupled with an even higher level of expectations instilled in its shareholders, PRISMS was purchased from the Omnibus liquidators by Kim Davidson and Greg Hermanovic, forming the inception of Side Effects Software.

Side Effects developed and licensed PRISMS to end-users for 11 years until 1998, and PRISMS was used in over 200 feature films, culminating in its first Academy Award in 1998. Meanwhile Houdini emerged in 1995 as Side Effects Software’s next-generation product, serving the visual effects market to this day. In 2002, Side Effects Software received its second Academy Award for the innovations within Houdini, with another 300+ features films made with Houdini to date.

Greg Hermanovic spun-off Derivative in 2000, starting from the then-current Houdini 4.1. Derivative embarked on a mission to make a real-time 2D and 3D interactive animation product, suitable for authoring any form of interactive art/media/visualization.

Then in 2008 Derivative released its next-gen TouchDesigner 077 in beta form, which was a rewrite of its previous incarnations, incorporating fully procedural OpenGL compositing and rendering system using the GPU, a new user interface and more. Today’s TouchDesigner 099 is the latest evolution of that next-gen platform